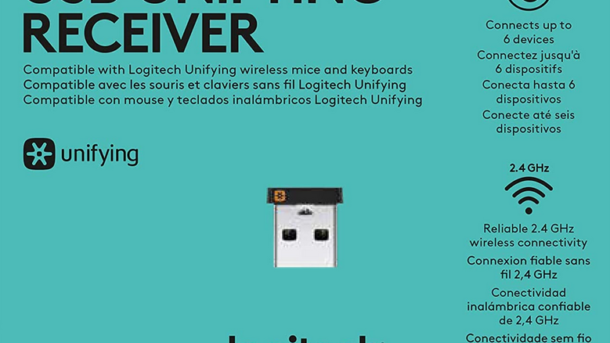 Logitech is a multi-brand tech company known for its innovative products in the areas of gaming, computing, music, video, and more.

It has designed some of the most famous computer peripherals, technology solutions, and industry firsts like a thumb-operated trackball, cordless mouse, and laser mouse.

One of the most recent offerings from Logitech is the Unifying wireless technology that offers newer ways to connect peripherals and devices.

Let us try to learn more about the Logitech USB Unifying Receiver, its features, compatibility, and usage.

What is Logitech USB Unifying Receiver?

A small USB wireless receiver based on the nRF24L family of RF devices, this product uses 2.4GHz band radio communication to allow connecting up to six compatible devices to a computer.

The dedicated receiver can link mice, keyboards, touchpads, trackballs, and other peripherals to a system through software. Input devices that come bundled with the receiver are paired beforehand and should start working out of the box.

With the Logitech USB Unifying Receiver, one can establish a reliable connection with six wireless devices up to 10 meters with just one USB port. Such a good range gives you easy mobility without having to carry your keyboards and mice while commuting.

You can keep your preferred peripherals at home, work, or in the bag and enjoy their functionality by moving the computer with the receiver in range.

Input devices with the receiver built-in connect instantly through plug and play. Additional devices can be paired through the Logitech software for Windows and macOS.

The Unifying receiver is often packed in Logitech mouse, keyboard, and combo sets or you can get it separately. Some peripherals would allow storing the receiver inside them.

How To Use the Logitech USB Unifying Receiver?

It is easy to use the Unifying receiver on different platforms to connect a wide range of peripherals. Each device can be paired to a single receiver per profile.

Though most devices store just one profile, some newer products from the brand feature multiple profiles to allow connecting them to multiple receivers at the same time.

This way, you can use the receiver in several systems like laptops and desktops simultaneously by changing profiles to choose the computer.

This is more convenient than moving the peripheral from one receiver to another by changing the software setup. It also removes any limitation on the maximum number of pairings allowed. It even allows using the peripherals on devices not supporting the Unifying software.

Older Logitech devices have a limit on the number of pairing changes at 45 times. As soon as the 45th connection is made, you can no longer connect the device to another receiver. Users who like to switch devices between multiple computers with receivers may find it difficult to work with the connectivity limit.

For example, somebody who switches a mouse frequently between home and work receivers would exhaust the limit of pairing switches in a short time. However, newer Unifying devices don’t have such a limitation and can switch the pairings any number of times.

The software provides you the convenience of pairing multiple input devices to a computer running Windows or Mac OS. With this software on your computers/laptops, you can get rid of using individual receivers for your devices and get your peripherals instantly ready to use.

It not only reduces the number of USB ports you use but also eliminates the need for frequent plugging and unplugging receivers.

It can be used via a command-line interface or GUI and can pair and unpair devices with the receiver. It can also control some settings of the device like function key behavior and scroll wheel direction.

Another software for pairing and unpairing Logitech devices with the Unifying receiver on Linux systems, Itunify lists all the available devices and facilitates easy management.

This program also works in a similar way with the receiver to make it easy to find the devices you can connect and use.

Though this software interacts through a GUI, it does not allow pairing/unpairing of Logitech devices through the interface. However, it includes a command-line tool that enables doing this.

Logitech USB Unifying Receiver is overall an excellent product for users looking for a simple way to use their computer peripherals at different locations on multiple systems.

You just need to carry the small receiver with you to be able to use multiple keyboards, mice, trackballs, and other input devices on different computers and laptops.

We hope this guide helps you understand how the Unifying Receiver can be useful to you and how you can make the most out of it.