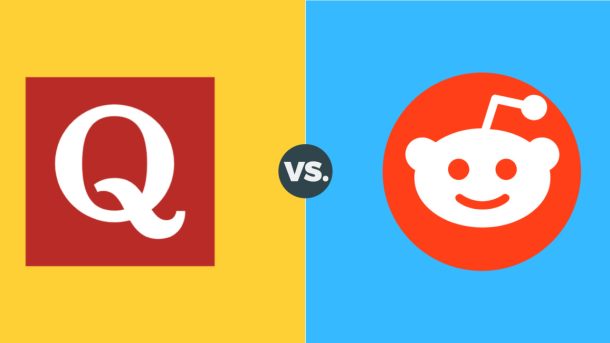 As the world goes digital, more and more people are turning to online platforms for socialization. There are several websites that facilitate interaction between users on different topics; Quora and Reddit are two of these. These platforms have grown significantly in the past few years to boast a massive user base.

Quora and Reddit are similar in many ways but differ in some respects. Both the websites work as forums where people post questions, give answers, and communicate with others. Let us try to understand the main differences between the two popular platforms.

Quora is a popular question and answer site where users can ask for responses to questions they may have. The U.S-based website was founded in 2009 and opened to the general public in 2010. It is completely user-controlled which means users create, manage and organize the content. Quora is available in a variety of languages and enjoys global popularity.

The platform lets you follow your topics of interest. It can be used as a research tool as votes from users help verify the accuracy of the information available. You can respond to questions and vote on the answers. It is basically a crowded online community focused on question-answers.

An American social platform founded in 2005, Reddit is a community-oriented discussion forum and social news aggregator that allows posting on varied subjects. It is a highly popular website that boasts over 430 million monthly users known as ‘Redditors’. It is available in several languages including English and there is no limitation to who can use it.

Reddit also works as a web content rating platform. Users can upvote or downvote the content posted on the website depending on whether they like or dislike it. There is no limit to following topics (subreddits) on Reddit and you can post images, text, links, and videos. It has a user-friendly, simple-to-use interface that lets you get information on the topic of your interest, find a solution to your problems and promote your business.

Though both Quora and Reddit are social platforms where users can interact and share their thoughts and ideas, the two have some key differences worth noting. Quora is basically a question and answer site while Reddit is a social news aggregator and discussion forum. Let us try to understand how the two services differ from one another.

While both Quora and Reddit allow people to post on their topics of interest and respond on a variety of subjects, there are some differences in their functionality. Quora is solely based on the concept of question-answer.

It is quite professional in terms of the content and structure of posts. The community on the platform consists of professionals and experts holding in-depth knowledge about the subjects.

On the other hand, Reddit is more self-sufficient with a robust booting and downvoting system. The platform grows at a tremendous rate, with about 8,000,000 visitors added every month. The community is knowledgeable and updated about the latest trends. The website is popular for its ‘ask me anything’ section.

This does not mean Quora does not expand. It keeps adding new genres and subjects along with technical fields, giving more variety to the questions and answers you can find on the platform. The difference is that it is not easy to find an expert opinion on Quora as there are so many answers available for any question.

Talking about the popularity, Reddit boasts a larger user base as compared to Quora though the latter has been continuously multiplying users in the past few years. When you are interested in learning about a social media trend or insight, Quora remains the best choice as you may easily find an expert answer that is difficult to get on some blog or website.

Comparing the traffic of the two platforms, coming to an accurate conclusion is difficult. However, reports suggest that Reddit had about 1.7 billion visits, making it one of the most popular social networks. This clarifies that it is much more popular than Quora. While Quora grows at a fast pace, Reddit achieves better popularity largely due to its IAMA section.

Talking about the topics mainly dealt with on the two services, Reddit is a more diverse platform as compared to Quora as it welcomes diverse thoughts and opinions. Any user can share his viewpoint and create a community.

The Reddit community is known to support charity causes and consists of people interested in bringing a positive change in society. Overall, it is a platform for those who want to join a network and accomplish a positive goal. Quora, on the other hand, emphasizes more on professional subjects and genres.

Reddit is known to offer a better user experience with its support for a variety of media including videos, images, and text. It is more engaging and user-friendly as compared to Quora. The latter is more of a professional platform that appeals to users interested in to-the-point answers. Quora is not the best option for assistance on trending topics as it only deals with questions and their answers.

Both Reddit and Quora work with the support of communities but the former has a larger audience base and wider coverage whereas the latter restricts the experience to information on specific topics. It does not rank or identify the latest trends and the most popular subjects like Reddit.

Looking at the differences between Quora and Reddit across key areas, it is difficult to conclude which of the two is better. As both the platforms are Q&A-focused, it is not easy to rank one over the other on the basis of their merits.

Both the websites have millions of users and a steady growth rate. However, Reddit enjoys a bigger audience and popularity for the huge variety of subjects it covers. Users should analyze the platforms and pick their choice based on their requirements and expectations.